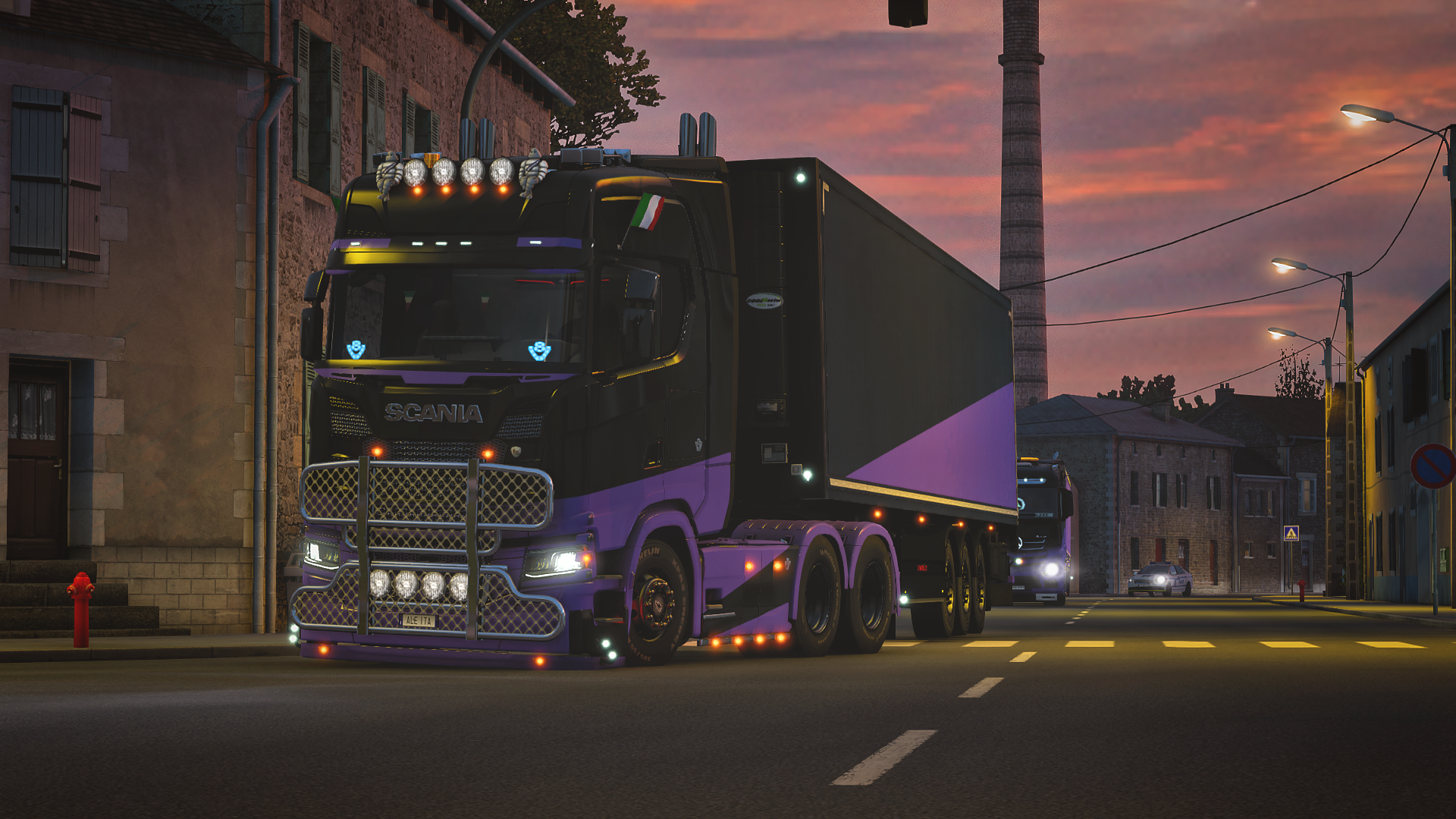 Hello everyone, it's already February which means it's time for the second newsletter of the year.

Please congratulate Rokas on becoming Staff Member of the Month for February 2022!

Rokas joined Prime Logistics almost a year and a half ago, on the 28th of September 2020. He's not only attending events and completing his exams, but he also logged around 90.000 kilometres of jobs. In December 2020 Rokas decided to apply for the Convoy Control Team, which he successfuly joined on the 7th of December 2020, which is over a year ago. Since then he has been attending a big amount of events as Convoy Control. On the 29th of October 2021 he also joined the Event Team where he's doing a good job by creating saves, planning convoys, making event announcements and more.

Keep up the good work Rokas! We really appreciate it!

Please congratulate Coolieboy on becoming Driver of the Month for February 2022!

Coolieboy joined Prime on the 6th of August 2020, and after leaving the VTC for a while he returned on the 6th of November 2021. Since then he already logged around 90.000 kilometres, and together with his completed exams and 9 attended events he has a total of around 100.000 points! Apart from attending convoys he also likes to take pictures in-game, which we can admire in our Picture of the Month competition. Coolieboy is very social and is always open to have a chat.

Thanks Coolieboy for bringing your positivity in this VTC, we really appreciate it!

Congrats Alee_TMP on winning the first Picture of the Month competition with a total of 46 upvotes! An astonishing picture of your truck with a phenomenal sky in the background!

In February we mostly did finish internal work, but we did also review the public and driver suggestions. All of these got added to the Trello so the different departments can work them out.

In February we will also be looking into changing a current system we have in place, but stay tuned for that.

We received 127 applications in January, which is a very small decrease compared to December. A total of 73, or 57,5% of the applications got accepted which is almost similar to last month. This way our driver count increased from 719 drivers to 774 drivers.

We saw an increase in the amount of requested exams, a total of 100 exams got requested which is around 3 each day. The passing rate also stayed quite high, at 75% which is positive to see.

In January there were also some new routes that got added and the amount of available routes has doubled. We've seen that some of these new routes have been quite popular, which can be seen in the graph below.

We can proudly say that every event we attended, or hosted has been logged; this means that all our drivers that attended a convoy received 500 points.

In February we also attended 26 events, of which we hosted 7 ourselves, 6 public ones and 1 private one. The trend we saw last month is still slightly increasing, which is great to see! In February we will also be doing something special to stimulate our drivers even more to attend convoys, stay tuned for that! 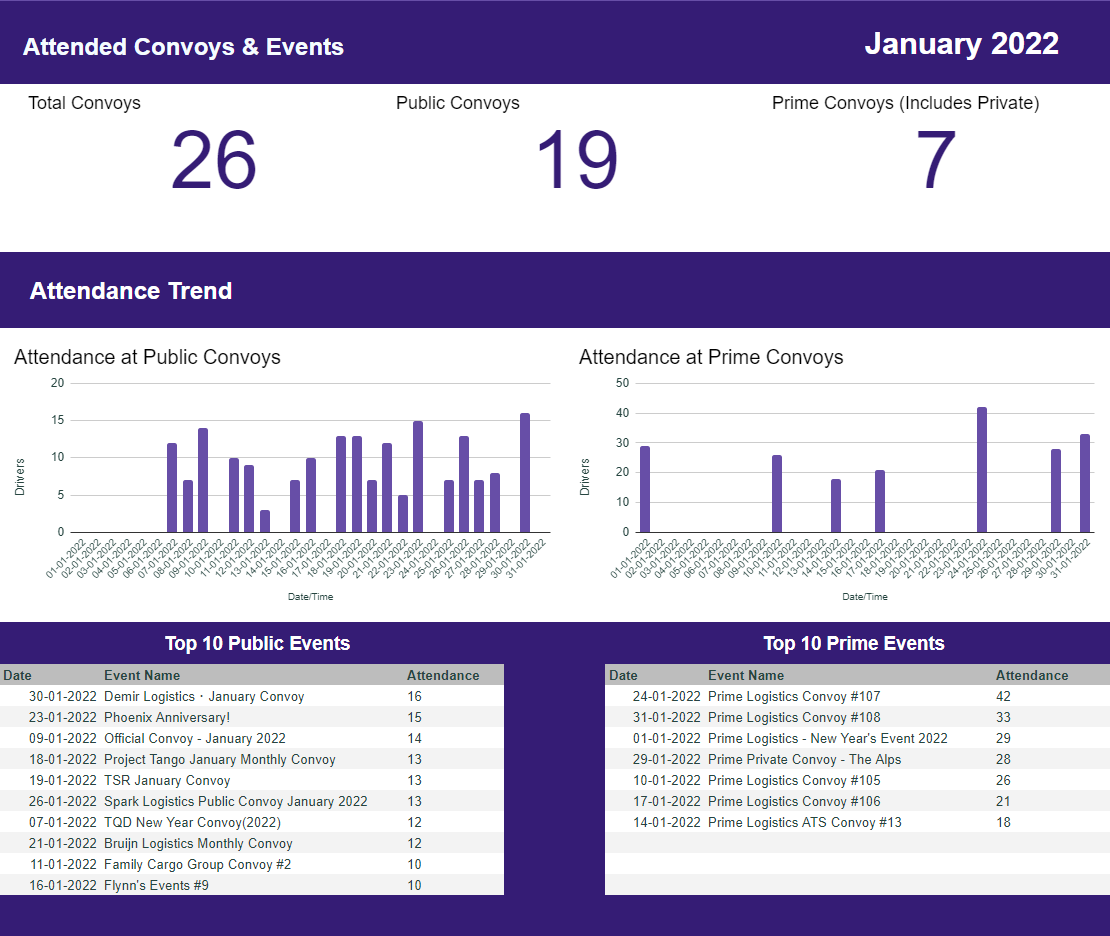 After working very hard in December our Development Team earned some rest, but nevertheless they were still releasing updates and bringing in new features. Next to internal bug fixes, additions and changes we also had some public additions.

The first one being a banner that our drivers can put in their bio or as a signature. The banner is updated automatically with their latest stats, an example of this can be seen in the pictures below.

Next to that we also received a driving license, which shows the completed exams of the user. An example of this can also be seen in the picture below.

As mentioned earlier we also now got a bonus point system, which can give our drivers bonus point for certain jobs but also for attending certain events. Another cool feature we got is a timeline on the jobs page, which shows all the events that happened during their trip: receiving a fine, receiving damage, paying toll, taking a ferry and so on. This can also be seen in the picture below.

We see a lot of green numbers in our statistics, which is great! Only our likes received on Instagram and Facebook went down, but it are very low numbers so we shouldn't be worried about that. Thanks to our new weekly topic, Memes Monday on Twitter we received quite some new followers, and way more likes than last month. We hope that you are enjoying the memes created by our one and only mememaster, Bastet.

Abi joined the Examination Team as an additional role.