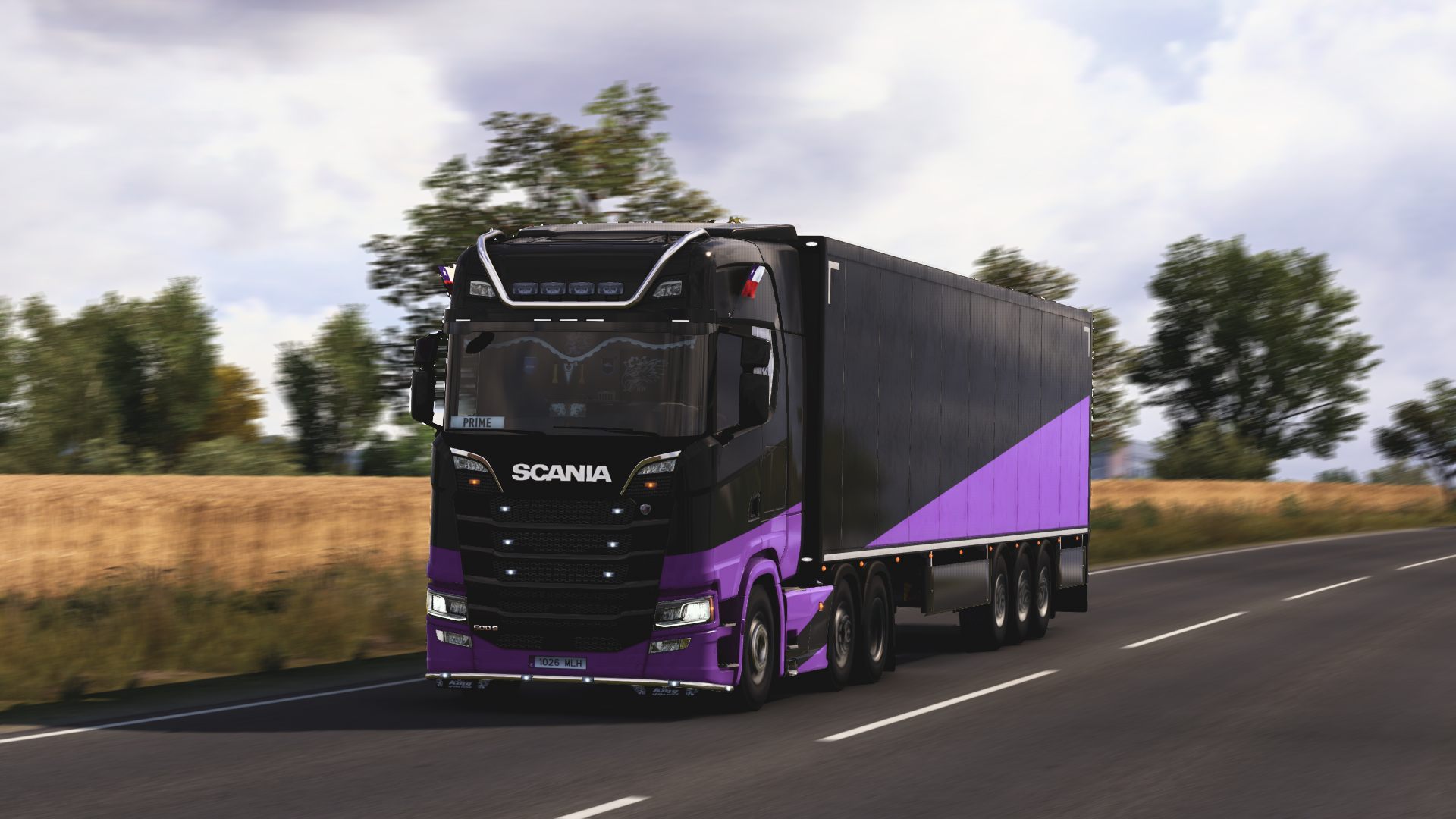 It’s already May, the month when the flowers are blooming and when the temperatures are rising. A new month also means a new newsletter. We hope you will enjoy the read.

Congratulations bluca on becoming Staff of the Month for May 2022!

Bluca joined the VTC in December 2020 and has since then logged an incredible amount of points, 430.000 points to precise. You might have spotted Bluca in the voice channels as he loves to go on a relaxing drive together with his friends and drivers from the VTC. Not only is he a driver, he's also in the Media Team creating assets for our drivers and is helping out at our weekly convoys as a photographer. He started his career in the staff team on the 26th of January 2021 and has since then created multiple skins that you can enjoy.

Thank you for staying so dedicated to the VTC, Bluca. Keep rocking it!

Congrats Steαlth on becoming Driver of the Month for May 2022!

Stealth has been in the VTC since the first of February this year, and has already logged a total of 90.000 points. Not only is he logging jobs and completing exams, he also attended 19 events which is amazing to see. Most of you will know him from our Discord, as he is always open to have a chat with the drivers. Since he joined our Discord server in February he already sent 12.606 messages, so you most likely already had a chat with him earlier. He's a warm and friendly person who's always open for a chat and cares about the VTC.

Thank you Stealth for all the positivity and activity you bring within the VTC! You really deserved this.

Congrats enphyte on winning April's Picture of the Month competition with a total of 60 upvotes! A beautiful picture of Enphyte's Renault decorated with some Easter decorations.

In April we did not only organize one Management meeting, we organized two this month. One to go over all the public and driver related suggestions, and all of these suggestions have been added to the Trello so the directors can work on them; and another meeting to discuss internal subjects from within the staff team.

But this is not all, we also introduced our first official 8x4 skin and refreshed our American Truck Simulator skins. The 8x4 skin had been requested a long time ago and after some searching we found the perfect skin. Next to that we had to refresh the ATS skins due to them all being different depending on which truck and cabin you use. Now our drivers can go to the Drivers Hub, select a truck and then they will see the correct skin with the correct color order.

In April, we saw a decrease in the number of applications submitted. The acceptance rate slightly increased from 53.68% to 53.92%, a 0.24% increase, so incredibly consistent. We welcomed 55 new people into the VTC in April.

Our driver count again saw a drop in April. We went from 638 in March to 618 in April, a 3.2% decrease. This is again as a result of the continuation of activity checks, where we are making sure all our drivers are meeting the monthly requirement.

The percentage of passed exams, and number of points per exam stayed close to consistent.

In April, all events were logged, which is great to see, since some were missed in March. We hosted 8 convoys in April, and attended 22 public convoys.

Our highest attendance was 50 people at an event during April, which is higher than in March. We saw an increase in the average number of drivers attending events in April, from 10 in March, to around 14 in April, which is amazing to see. Our new points system is helping to improve attendance at convoys.

We welcomed new members into the Convoy Control Team in April, some of which you may have seen at our convoys! You’ll be able to find everyone who joined at the bottom of the newsletter. 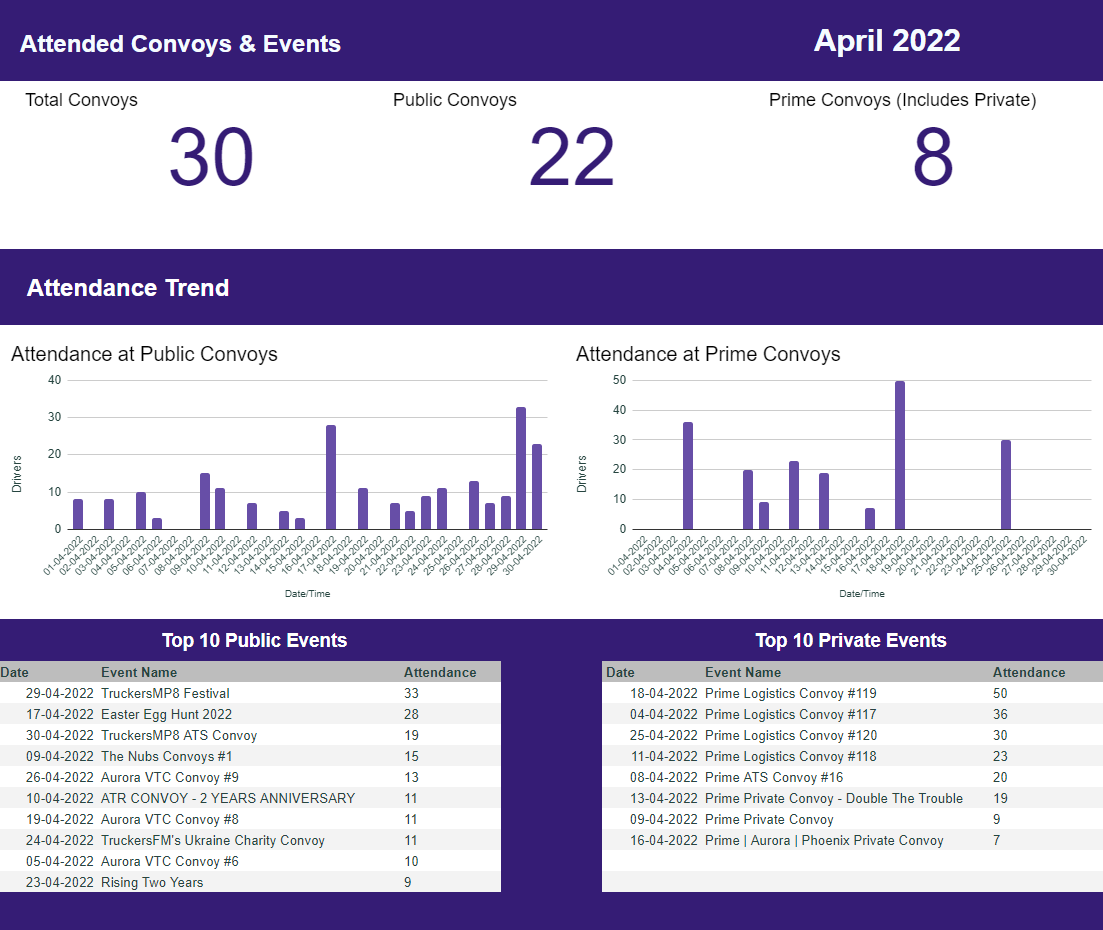 As usual there has been some bug fixing in April, whereas bugs were fixed as soon as possible.

But we also added some new features to the Drivers Hub regarding the exams, from now on certain routes can be linked to certain exams. This is not implemented now, but might be used in the future. There were also some small changes: if you click on the Discord logo on someone’s profile it will now copy their Discord username.

Navio also released a new installer, where you can automatically uninstall the tracker instead of having to delete multiple folders and files. Nex to that they also made it possible for us to have a live map so you can spot our drivers on the road, this can be accessed by clicking here.

In April, we saw a continuing trend of growth on all our platforms. We did see a few more red boxes compared to March, though.

We also welcomed 2 new members into the Public Relations Team in April! You will be able to find them all at the bottom of the Newsletter.

[Recruitment Team] goshkata58 has joined the Public Relations Team as an additional role.

Thank you for reading this newsletter, we hope you enjoyed the read!