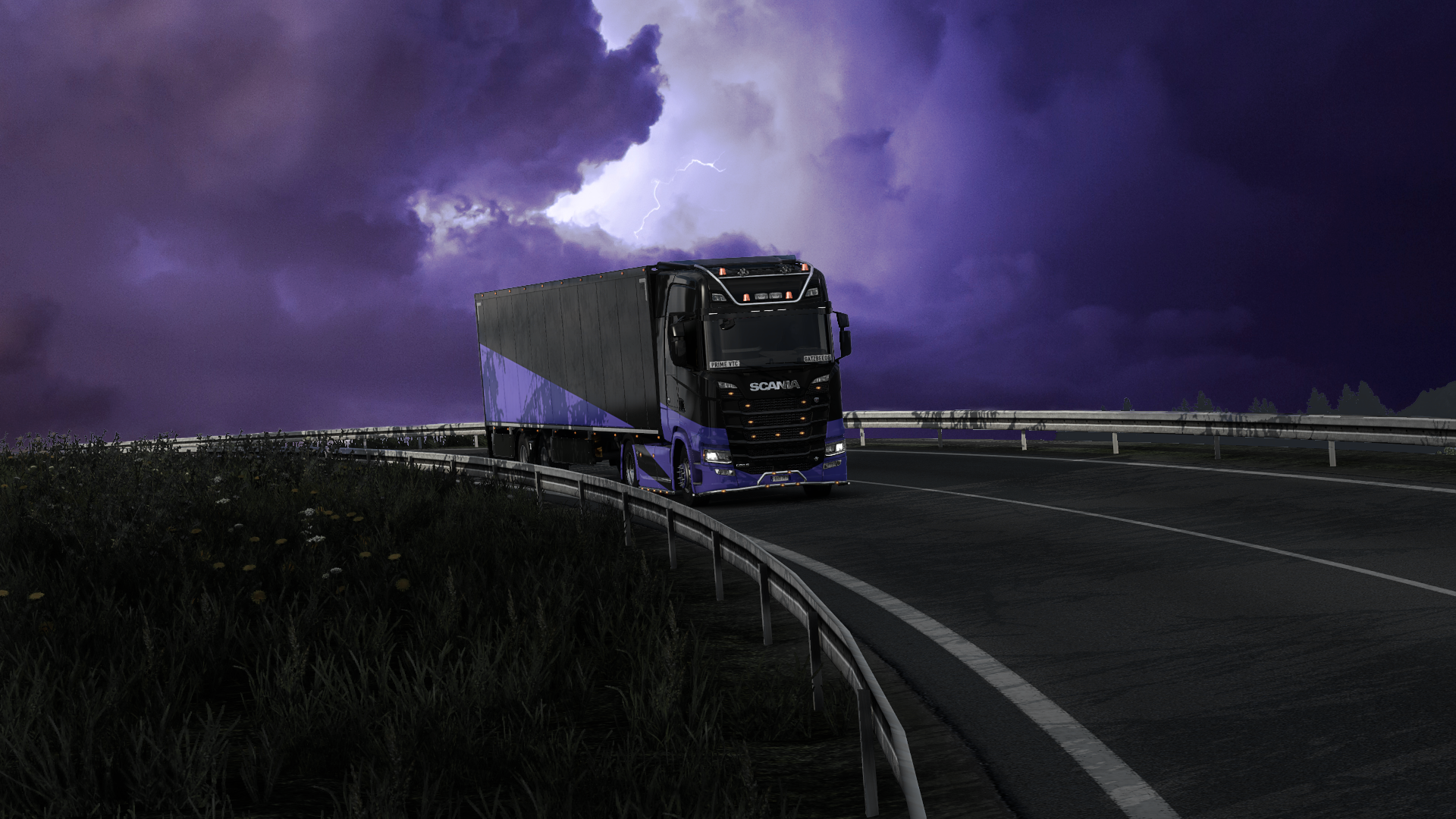 Hello everyone, January is here which means it's time for the newsletter of last month!

A Happy New Year everyone! During this festive period we had a small Christmas break for our staff, that's why the newsletter is published a bit later than usual.

Please congratulate Oli on becoming Staff of the Month for January 2022!

Oli has joined Prime in April 2021 and has since then been very active in our Discord channels. On the 26th of July he joined the staff team as a Convoy Control, so you might have spotted him at one of our weekly convoys. One month ago he also joined the Public Relations Team, creating some epic posts for our socials. Oli is very social, and is always open for a chat, next to that he's always ready to answer questions from our drivers and the public.

We appreciate all the work you are doing in the VTC, keep rocking it!

Please congratulate iEnMiTy on becoming Driver of the Month for January 2022!

iEnMiTy joined Prime on the 14th of August 2021 and has since then logged a total of 112,246 kilometres, which is incredible! Despite the tracker problems he still kept logging manual jobs. iEnMiTy is also very active in chat, and is always open to have a chat with our drivers; thank you for all your support and all the cosiness you bring into the VTC. Additionally he has also been supporting us financially by becoming a Prime Patreon.

Once again, thanks iEnMiTy for all the positivty you bring into the VTC! Keep it up!

Congrats Inevitable on winning December's Picture of the Month with a total of 50 upvotes! A really beautiful picture of you celebrating the New Year in your truck, while still delivering your freight.

Congrats Goshkata58 on winning the staff's Picture of the Month competition with a beautiful edit of Chris' car (COO)!

In December we had some internal changes, but additionally we also made a big change. All the senior staff have been changed to assistant directors, as they are technically assisting the directors. They also received more permission and are able to replace the director when needed. There aren't a lot of public changes, but internally some things got changed.

In November we received a total of 136 applications, of which 80 got accepted; this is double the amount of last month. This is probably caused by our new tracker, and Drivershub. There's also a clear difference in the percentage of accepted applications, this is caused by our new Drivershub which automatically checks whether a new applicant meets some of our requirements, if they don't they can not apply. We also had 22 retired drivers rejoining the VTC, and a total of 36 drivers leaving the VTC. Our total driver count increased from 664 drivers at the end of October to 719 drivers at the end of December, which is an increase of 55 drivers, or 8,3%. It's amazing to see how fast the VTC is growing!

As it's the end of the year we will share the statistics of 2021 with you. The examinations team conducted a total of 671 exams last year, which is approximately 2 exams each day. The other statistics are not completed, as they were only getting logged since July. But this still gives you an insight in the most popular routes, and most popular type of exams.

In this graph you can also see the amount of requested exams per month, and we can clearly see that January was the busiest month, will it also be the same this year? Stay tuned for that in the next month's newsletter!

We attended a total of 21 events in December, of which 4 were hosted by ourself. This is a decrease compared to last month, but this is due to the festive period where we didn't attend much events. In the last newsletter we also mentioned that we expected to see an increase in the amount of drivers that attend a convoy, due to our new Drivershub awarding points to our drivers. And we indeed saw a positive change, more drivers started to attend convoys, and we hope this trend will continue in 2022. 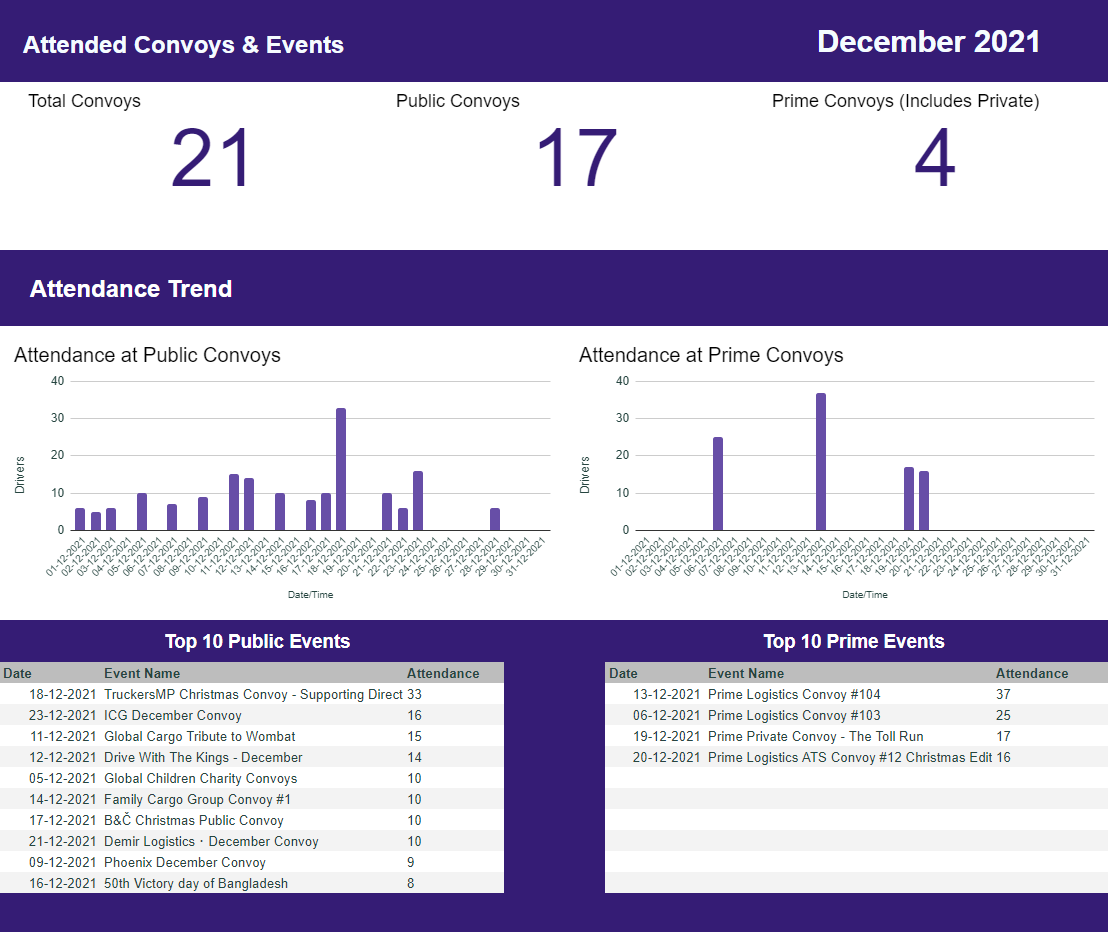 What a month was it for the development team? The biggest event was the release of our brand new Drivershub, together with a new tracker that automatically logs our jobs. In the beginning there were still some bugs, but Nathan and Matt worked really hard to fix all those bugs so we could end the month with a perfectly working Drivershub. And I can proudly say that they succeeded. The Drivershub is working very fluid, and the tracker is logging most jobs perfectly. And when there was a bug we had Nathan to the rescue, fixing all the important bugs in no-time! We are incredibly thankful for all the work you've done Nathan and Matt! Our Drivershub received many updates, of which the changelogs can be found on our Discord server.

Additionally the bot also changed a bit, as we changed from the !-commands to the /-commands and it has been updated from DiscordJS 12.4.1 to DiscordJS 13.4.0. The verification system also got changed, previously new members only had access to two channels, one with the rules, and another one where they had to type !verify to get verified and to receive access to the rest of the server. This got changed and now we don't have that channel anymore, instead we are using Discord's verification system.

In November we had a significant decrease in the amount of posts and likes, unfortunately this trend had continued. But there's a simple explanation for that, we just had less posts than the previous month and is what the festive period, and we didn't want our staff members to complete too much work during this festive period. The positive thing in December was that we are still getting more and more followers, which we are thankful for!

Tony has been promoted to Senior Human Resources.

szykaro23 has joined the Recruitment Team as an additional role.

RagtagBoss has rejoined the Convoy Control Team as an additionally role.